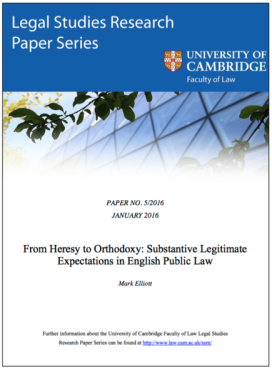 I recently finished work on a paper examining the development of the doctrine of legitimate expectation. Entitled ‘From Heresy to Orthodoxy: Substantive Legitimate Expectations in English Public Law’, the piece begins by noting that while English administrative law is unusual in the common law world for its embrace of the doctrine of substantive legitimate expectation, it is only 20 years since the doctrine—or at least significant aspects of it—were judicially castigated as ‘heretical’.

That position is advanced by reference to two lines of argument. First, it is argued that the doctrine of substantive legitimate expectation can be understood in terms more subtle and less uncompromising than those implied by the early cases which attracted particularly critical attention, both academically and judicially. Second, as well as addressing the substantive legitimate expectation doctrine’s compatibility with orthodoxy, orthodoxy’s compatibility with the doctrine is examined and two distinct but complementary propositions advanced. It is argued, on the one hand, that understandings of what orthodoxy is have evolved somewhat in the last 20 or so years. On the other hand, it is argued that understandings of what orthodoxy requires, in doctrinal terms, have also changed.

These shifting perceptions of the nature and implications of orthodoxy have served to carve out a space for the substantive legitimate expectation doctrine today which is more generous than that which previously existed. The story of the evolution of the doctrine of substantive legitimate expectation thus forms part of a larger tableau upon which is recorded the recent evolution of English administrative law itself.

My paper will form part of collection of essays that Matthew Groves and Greg Weeks are putting together on Legitimate Expectations in the Common Law World. The book will be published by Hart Publishing later this year. In the meantime, a pre-publication draft of my chapter can be downloaded here.