The second edition of Public Law – the textbook that I write with Robert Thomas – has been published by Oxford University Press. Although it is only three years since the first edition was published, much has happened since then. We were putting the finishing touches to the first edition in the immediate aftermath of the 2010 UK general election, whereas we are now well over halfway through the UK’s first period of peacetime coalition government for many decades. 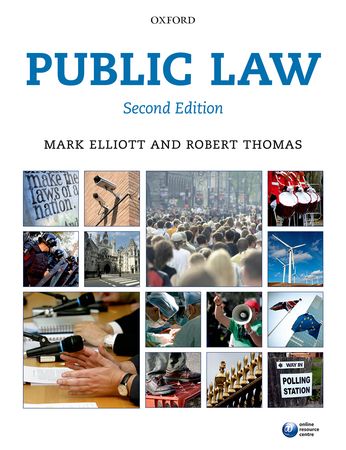 As well as being constitutionally significant in itself, numerous developments of interest to public lawyers have emerged during the coalition government’s time in office. From the extension of devolved powers in Scotland and Wales to the publication of the Cabinet Manual; from the publication of the reports of the commissions on a UK Bill of Rights and the West Lothian question to the restoration of the right to protest within the vicinity of Parliament; and fr
om the introduction of fixed-term Parliaments to the creation of police and crime commissioners, the last three years are testament to the dynamism of public law. Nor does the pace of change or debate show any sign of letting up. The Scottish independence referendum (to be held in September 2014) is likely—whatever its outcome—to have profound consequences for the development of the UK’s constitution. Furthermore, questions about the UK’s involvement with the European Union and the European Convention on Human Rights are moving from the margins to the mainstream of political debate.

These developments – and many others – are reflected in the text of our second edition. However, our goal is to enable students to understand, explore and engage with the key principles, issues and debates of public law. Recent developments are important only to the extent that they change or aid understanding of such matters. We have therefore attempted to be judicious in the extent to which we have added new material. This is not to say that the second edition of this book is more or less the same as first: far from it. We have updated, and in some cases substantially revised, every chapter; but we have carefully selected new material, using it to shine fresh light on enduring issues (and identify new ones), rather than incorporating it for its own sake.

This edition of the book also benefits from two more obvious, structural changes. First, we have added a new chapter on the police. This chapter examines the legal powers of the police and also situates those powers, and the police in institutional terms, within a wider contextual framework of concerns relating to the regulation, accountability and governance of the police.

Second, the majority of the chapters are accompanied by short commentaries written by leading scholars with particular expertise in the relevant field. One of the great risks involved in writing a textbook is that a desire for uniformity, systematization and coherence may obscure tensions and disagreements that exist within the subject area. While we have striven to write Public Law in a way that avoids those pitfalls, we have chosen to include expert commentaries as a way of highlighting the fact that so much of the subject is contestable and contested. The expert commentaries thus complement—rather than attempting to summarize—the chapters to which they relate. Indeed, some of our commentators disagree with aspects of our text. Such differences of opinion characterise public law as a subject. Their existence should be celebrated, not finessed away. We recognize that this may be disorientating; but coming to terms with public law often has less to do with identifying the ‘right’ answer than with grasping why it is that people disagree about what that answer might be and how we should go about determining it.

Further information about the book can be found in OUP’s online catalogue. The book is accompanied by an Online Resource Centre, and the first chapter can be downloaded free of charge.