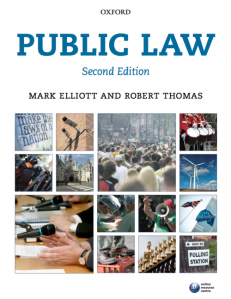 working, with my co-author Robert Thomas, on some updates to accompany our Public Law textbook. Our focus in the updates is on six key areas in which the constitution is undergoing, or is likely to undergo, change. We have taken as our reference point the outcome of the 2015 general election, and its likely implications for the future of the British constitution.

I will be posting the updates (which will also be published on the Oxford University Press website that accompanies the book) as a series of blog posts over the next couple of weeks. The posts will cover the following topics: the Scottish independence referendum; English votes for English laws; devolution within England via the Cities and Local Government Devolution Bill; House of Lords reform; the replacement of the Human Rights Act with a British Bill of Rights; and UK membership of the European Union and the EU Referendum Bill.