Skip to content
Contrasting views on House of Lords reform
Other

As mentioned in a previous post, the House of Lords Reform Bill – a key plank of the Liberal Democrats’ proposals for constitutional reform  – was withdrawn from Parliament, because […] 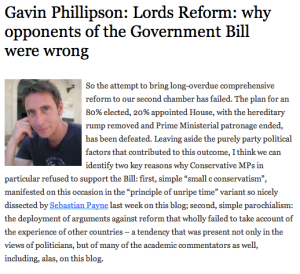 As mentioned in a previous post, the House of Lords Reform Bill – a key plank of the Liberal Democrats’ proposals for constitutional reform  – was withdrawn from Parliament, because the Prime Minister judged that he could not sell it to a sufficient number of Conservative MPs. But of course discussion about whether – and, if so, how – the House of Lords should be reformed has not stopped.

Earlier this week, two interesting posts on this topic were published on the UK Constitutional Law Blog. In the first post, Professor Gavin Phillipson argues that opponents of the Bill were wrong; that the hybrid House of Lords provided for by the Bill – mainly elected but with some appointed members – could have worked; that it would have been an improvement on what we have now; and that there is no plausible answer to the argument that democracy requires the House of Lords to be an elected chamber.

Professor Dawn Oliver, in response, argues to the contrary. In particular, she asserts (in my view, for what it is worth, correctly) that: “The combination of elected and appointed members proposed in the draft bill would not produce a system of scrutiny and checks on government as good as or better than the present arrangements as they operate in practice. Thus going over to a largely elected composition in the second chamber risks throwing the baby out with the bathwater.”

If you’re interested in this issue, have a look at the two posts – they are accessibly written, and provide two illuminatingly contrasting perspectives.

Posted on September 27, 2012 0 By Mark Elliott Other Posted in Other

Aimed at students taking a range of public law modules, Public Law combines comprehensive coverage of the subject with depth of analysis. Written in an accessible style, it is the UK’s best-selling textbook in the field. The third edition of the book, written by Mark Elliott and Robert Thomas, was published by Oxford University Press in 2017.

This collection of essays, edited by Mark Elliott and Kirsty Hughes, examines the extent to which the common law protects, and is capable of protecting, constitutional rights, taking recent UK Supreme Court jurisprudence on this matter as a point of departure. Common Law Constitutional Rights was published by Hart Publishing in 2020.

Administrative Law is a leading text on English administrative law. The fifth edition, written by Mark Elliott and Jason Varuhas, was published by Oxford University Press in 2017. The book combines carefully selected excerpts from key cases and other materials with detailed commentary and analysis.