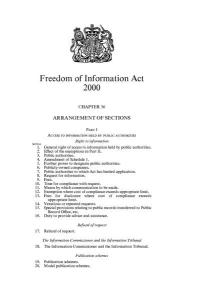 In an earlier post, I explained that the Freedom of Information Act 2000 gives the government a veto power, allowing it to override rulings that information ought to be released under the Act. The existence of such a power is – from the perspective of those who prize transparency and openness – a major flaw in the legislation. The Attorney-General today exercised the veto power (replicating a decision made by the previous Labour government), overriding a ruling that required the release of the minutes of Cabinet meetings that were held in the run-up to the Iraq war. The Attorney-General seeks to justify his decision on the grounds that releasing the information would be contrary to the public interest and detrimental to effective operation of the government. If you want to read more about this, try the following links:

Public Law for Everyone is written by Mark Elliott. Mark is Professor of Public Law and Chair of the Faculty of Law at the University of Cambridge. He is also a Fellow of St Catharine's College, Cambridge. From 2015 to 2019, he served as Legal Adviser to the House of Lords Constitution Committee. The views set out on this blog are purely personal.